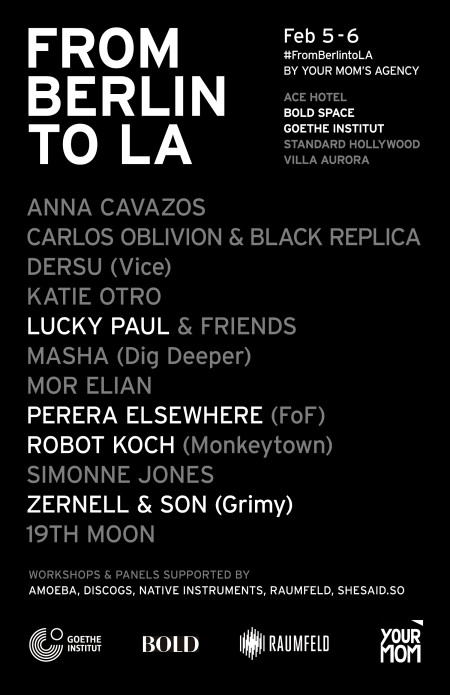 Berlin, Germany and Los Angeles, California are sister cities; in the past few years, the manpower and cultural flows between them have grown beyond expectations, with LA becoming a cultural hype capital in the US the same way that Berlin has in Europe.
From Berlin to LA is a two-day event taking place in several LA venues on February 5th and 6th; the project is initiated by Your Mom’s Agency in Berlin in partnership with the Goethe-Institut LA, Raumfeld and Bold LA, and will showcase the growing bond between electronic musicians in Berlin and LA – a bond that goes beyond touring on both sides as musicians exchange scene and tech intel, and absorb each other’s culture.
From Berlin to LA addresses electronic music enthusiasts of different horizons and ages thanks to panels and workshops about DJing or digital production, projections, live shows and DJ sets with a new tech twist or an old-school flair. All events are free entry with registration, and will showcase Berlin or Berlin-influenced electronic music ranging from electronica new beats, to house, techno and experimental.

From Berlin to LA is initiated by Your Mom’s Agency from Berlin, with the support of the Goethe-Institut-LA, Bold LA and Raumfeld, as well as shesaid.so, Grimy, Native Instruments, Barkin Kitchen, FoF, Discogs and Amoeba.

• All events are free and RSVP only • Facebook RSVP HERE
Press & general inquiries to info@yourmomsagency.com

• Saturday 02.06 in LA • Schedule & RSVP HERE
2pm: workshops at the Goethe-Institut with Perera Elsewhere (digital production for teens & young adults), Zernell & Son (crate-digging supported by Discogs & Amoeba, DJing with vinyl long demo/dance floor for kids & teens), Katie Otro (producing with Native for teens & adults in Spanish) – this is a family afternoon, children from 8 to 18 are welcome.
8pm: gathering at the Bold Space DTLA, across the Ace Hotel, with panel about visions of the Berlin scene from LA hosted by shesaid.so & XLR8R.
10pm: club night Yowsah! at the Ace Hotel DTLA hosted by Kim Anh with DJ sets by Perera Elsewhere, Masha and Dersu feat 19th Moon live vox.