Local Suicide have steadily refined their own shade of techno while growing their fan base and touring extensively for several years. Since their first release in 2014, they have had a few more tracks out, and now several tracks and EPs between the end of 2018 after their Asia tour and early this year.
First in December, Le Nez d’une Génération with Rodion on hfn music, shortly followed by Vespertines Unite with Low Manuel on Nothing’s Real, and Komm Ins Loch with Theus Mago on Duro with remixes by Aera and Colossio out in January – review clip from Mixmag below.
And some more out in March: a collab EP with Franz Matthew, Meditation / Tutan Jamon, featured in TSUGI magazine, followed by another collab EP with Curses out on Tusk, Magia, and finally, again with Curses, Who Cares, a track on Ombra International 9th release. Highlighted in TSUGI as well, Local Suicide feat Nicki Fehr’s new EP Leopard Gum (plus Already There) on Chloé’s Lumière Noire sporting remixes by Smagghe and Permanent Vacation’s Lauer out end May.

Check out pictures of their winter tour in Asia, read about their biggest year so far on Big Shot, and stay up to date with their new releases and gigs via Facebook or their blog.
Book Local Suicide worldwide HERE. 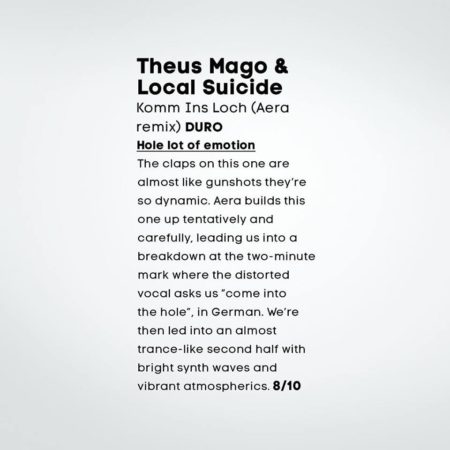