“… Launching a label, curating a festival and running a successful club-night to producing award-winning adult films, Sky Deep is an artist to aspire to. After stints living in L.A. and New York, she now resides in Berlin. A proud activist in the LGBTQ+ community, she launched club-night Letz Be On, [… she releases music] via her very own Reveller Records, and moonlights as a festival curator for Reclaim The Beats…”
Full article by Anna Wall in March’s DJ Mag, more about Sky soon on XLR8R, or now on 15 Questions.

We first collaborated with Sky in 2015 via Female:Pressure, and followed up with mixes, live improv at Berghain and late March at Tresor, panels and workshops at Soho House, Red Bull Studios for CTM and We Make Waves… and for this coming autumn, a very special project together with festivals  Reclaim the Beats and From Berlin to LA, and the Los Angeles Goethe Institut… more info soon! 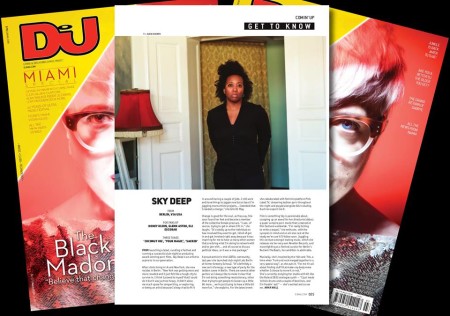